Back in 2008 when I was still a Bill O’Reilly fan and a mainstream “neoconservative” type guy who loved the idea of spreading freedom with very powerful explosive devices throughout the world, I still didn’t like Barack Obama. It was on the Glenn Beck Program, who I am also no longer a fan of at all, that I heard some recordings of Obama talking on some radio show in Chicago about the failures of the Civil Rights movement in how they did not go far enough when they backed off from demanding court-ordered “redistributive measures”. Or something to that effect.

I specifically remember the word “redistributive” rolling off Obama’s silver tongue like a drop of glue-based dew on a glistening fake house plant shining in Vaseline basking in the artificial light of a sun lamp. It sounded so seductive and scary.

Government, benevolent and friendly and wanting to help the poor, seizes money by force from anything productive. Politicians take the money and start a welfare agency. The welfare agency provides paychecks for its bureaucrats, all of whom are friends of the politicians who seized the money. The benevolent welfare agency with the big heart runs out of money providing paychecks to all the bureaucrats running it before it hands out any stolen money to poor people, so the welfare agency lobbies for more money, which they use to expand the welfare agency and give more paychecks to more buddies of legislators, all of whom have huge hearts and went into the business of government bureaucracies to help poor people because they are so selfless. They run out of money again before they start doing anything, so they lobby Congress to steal more money from anything productive so they can do their job of eating paychecks more effectively, with huge big hearts of love and giving and benevolence.

With production down, there’s less stuff, making everything more expensive and hurting everyone’s standard of living. Then we are told that in order to increase our standard of living, the government needs more money.

A few months later, a welfare agency bureaucrat flips a quarter to a beggar on Capitol Hill, quintupling the amount of money given to the poor by the welfare system. The bureaucrat goes home all proud of himself for being such a selfless and giving human being and cashes his next paycheck.

The government runs out of money again, so they call on Ben Bernanke to print it, in the name of stimulating the economy.

Government thereby redistributes wealth from productive people to Congress’ best friends who out of the goodness of their souls, got jobs at a government welfare agency.

Rafi and Natasha are paying 115 shekels a month in internet bills. Rafi and Natasha, those money grubbing selfish bastards with nothing but their own wallets on their minds all the time, look for a way to save money. All 115 shekels are going to the private money grubbing selfish internet company, which does nothing but think about how it can squeeze more money out of their greedy, miserly customers all day, every day.

In a fit of pure selfishness and miserliness, Natasha calls Angloprotekzia, a selfish miserly money grubbing company that thinks about nothing but itself all day. This company, purely in order to extract money from its customers, not thinking of the poor at all, provides a service of private negotiation with other private companies, and promises to lower Rafi and Natasha’s internet bills. In exchange, Angloprotekzia gets half of the savings.

In other words, they lower your bills in return for a commission.

Angloprotekzia, smelling the opportunity for money, cash-register heart beating and dollar signs filling its greedy eyeballs, calls the internet company and gets them to lower the bill from 115 shekels a month to 24 shekels a month, saving Rafi and Natasha 91 shekels a month that they can now use to sit there and count again and again, reveling in their money. Or invest. Or buy something with, whatever.

Say it with me. Let it roll of your tongue…Redistributive. 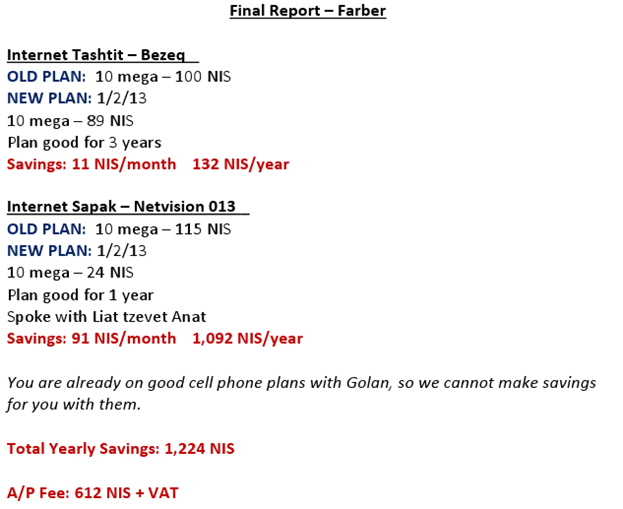