Who would have guessed that the Minister of Male Grooming Yair Lapid is a corrupt spendthrift little pisher.

According to an investigation by Ynet, he took a trip to the US in October 2013 that cost, somehow, 54,000 NIS. His sidekick, some politician named Micki Levi, the deputy Finance Minister, had a refrigerator installed in his car for 3,534 NIS. The list of profligacy is long.

The really funny part though is to see the various different government apparatuses try to steal from one another. How? License renewal for all the cars driven by gang members of the Finance Ministry cost 529,000 NIS last year. This of course goes right to the pockets of the gang members of the Transportation Ministry which charges monopoly prices on license renewal by outlawing all competition. The head of that gang is Yisrael Katz, who really looks and acts like Boss Tweed. 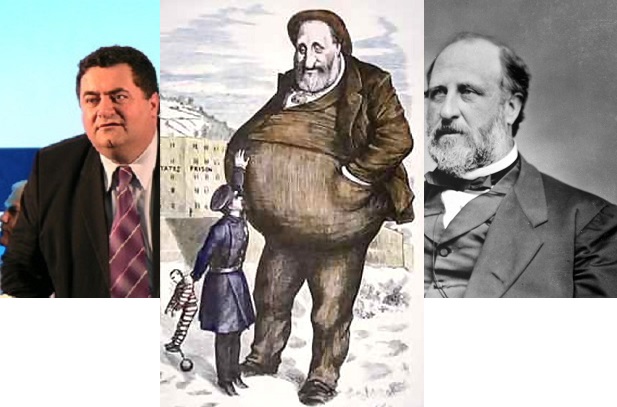 So Lapid isn’t “spending” half a million shekels on license renewal. He’s just transferring the money to another government office, that of transportation. Same with the million shekels he spent on gas. Half of it goes to Katz and his disgusting 100% Blu Tax on gasoline.

Lapid may be corrupt, but he’s a beginner compared to Katz.

Half a million shekels for holiday gifts including Pesach, Purim, and Rosh Hashana, because being a tax receiver isn’t enough. This is for 1,000 tax receivers who “work” for Lapid in the Finance Gang.

But that’s nothing compared to the Computerize the Government program, that has been going on since 2004 and was supposed to be finished in 2006. 82,000,000 NIS just this year, eight years behind schedule, who smells a computer-industrial complex here? BOONdoggle.

But we should all be proud to pay taxes, as I heard a Rabbi say recently in his Rosh Hashana sermon. The Rabbi is also a tax receiver, partly.

The Finance gang says it will cut all unnecessary spending. Sure. If I ever head the Bank of Israel, I will cut off the money at the source, so if they want to spend that much, they’ll have to tax you for it directly instead of have me print it for them and tax you through inflation.

The whole article, in Hebrew.