Skip to content
HomeDonald Trump or Franklin Delano Roosevelt, Who Is Worse on Immigration? 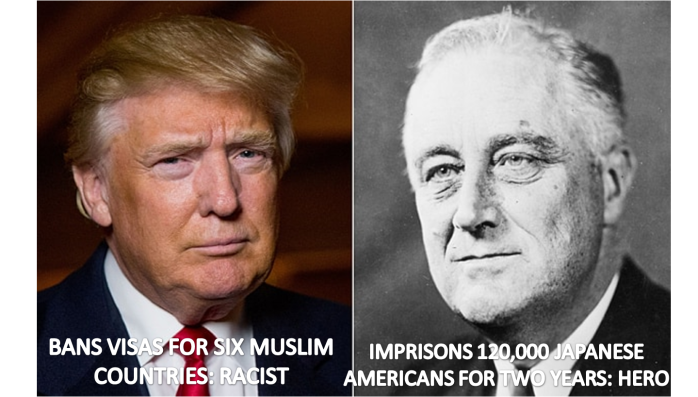 I am in no way defending anything that Donald Trump is doing with his immigration ban. I am not a fan of Donald Trump, I did not vote for Donald Trump, and I think the man is a bad person.

That being said, the liberals who are slamming Trump for his draconian immigration executive order should keep their hero, New Deal mastermind Franklin Delano Roosevelt in mind. Among other things, FDR:

Beyond that, he confiscated the gold of every single US citizen and arrested anyone who kept any gold illegally. He imprisoned people during the Great Depression for doing work inside their own homes in his crazy “spread the work” schemes.

Donald Trump, on the other hand, has banned visas for a few hundred people from Yemen, Iran, Syria, and three other countries he doesn’t like that I don’t remember. I don’t think that’s good. But I have perspective.

But despite all this, let’s all remember the Official Accepted Truth:

FDR is a beloved national hero, beloved by Jews especially, despite imprisoning hundreds of thousands of people by executive order and sending 973 Jews to their deaths. DJT is a racist Islamophobic scumbag for banning visas from Muslim countries.

2 thoughts on “Donald Trump or Franklin Delano Roosevelt, Who Is Worse on Immigration?”